The Atlanta-based wholesale distribution company signed a 45,000-square-foot lease at 4049 E. Raines Road for its first operations in Memphis. 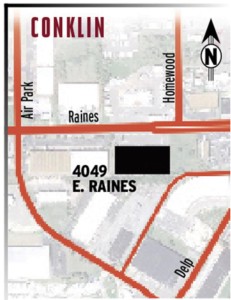 The company distributes goods to the HVAC market with an emphasis on the commercial aspect of that business, according to Bill Smith, its recently hired regional manager.

“They’ve wanted to expand into the Memphis market for years because it’s a pretty strong HVAC market with quite a lot of business,” he says.

One reason Conklin Metal liked the building is because it is right in the middle of an HVAC distribution sector.

“There are probably 10 HVAC distributors in that area so we could be in there with all the other suppliers,” Smith says.

The company recently started operations in Birmingham, Ala., and plans to open a new operation in New Orleans about the same time as its Memphis location. It also has locations in Atlanta; Greenville, S.C.; Sanford, Fla.; and Mobile, Ala.

“Conklin has been very successful, even during the slow economic times,” Smith says. “They’ve done a good job looking to expand because they’re such a well-run company.”

A lot of its distribution hinges on the construction trade, according to Smith, but while residential has been hurting over the past two to three years, commercial construction hasn’t seen as bad a drop-off.

The Memphis operation will be servicing Nashville, Little Rock, Jackson, Tenn., Paducah, Ky., and Jackson, Miss., among other accounts throughout the Mid-South.

The company has an eye on expanding in Memphis.

“It depends on how well things get going,” Smith says. “We’d like to continue to expand once we get a base here in Memphis and other locations.”

The three also operate as Farnsworth Holdings, which serves as an umbrella organization for various business entities.

New-to-market tenants choosing Memphis is a positive development, according to Mullis.

“I think it’s really important because it seems like the last few years, we’ve been moving people from one part of town to another because the rents have been so depressed,” he says. “It’s been a really good tenant market. It’s still a good tenant market.”

Other than taking space off the market, new tenants give the market true new absorption versus moving space from one side of town to another, Mullis says.

Mullis is seeing that in the current economy, many decisions are being driven by economics, with tenants choosing one building versus another based on total operating costs primarily.

This summer, Progression Realty purchased the building at 4049 E. Raines as well as another 147,000-square-foot building at 3980 Premiere. It has been actively looking to buy buildings across the country, but specifically the South.

“We haven’t found the right opportunities until this summer,” Mullis says. “There is still a disconnect between buyer and seller, whether that seller is the owner or the bank. There is a healthy divide between people like us with cash and sellers who bought too high and are unwilling to sell it at a loss or a lender holding out hope things are going to be better.”

Mullis doesn’t expect the sales market will get back to where it was in 2005 to 2007, when money was cheap and buyers could borrow the full purchase price without much risk.

“That merry-go-round has stopped.”